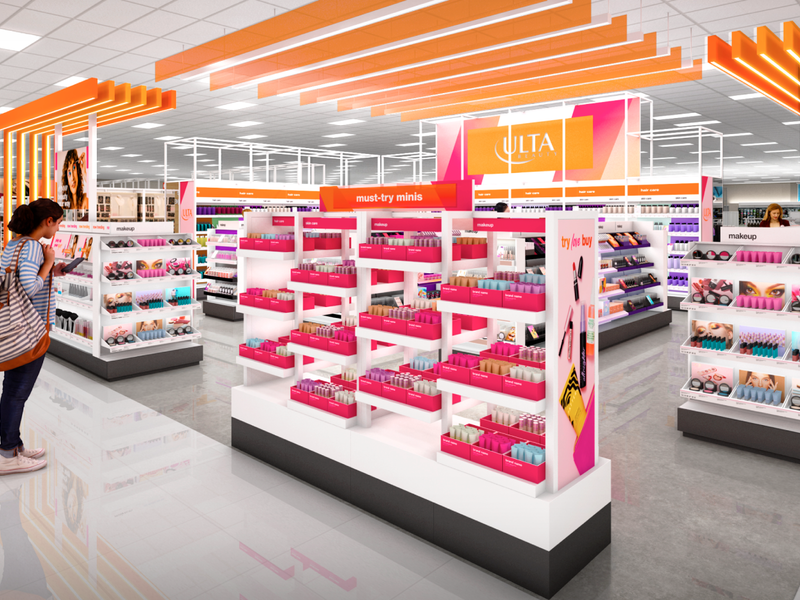 When Ulta Beauty opened its small-format shops within 100 Target locations last month, many shoppers voiced their approval. Social media commenters applauded the move, many calling it the “best thing” or “dangerous” for bank accounts. But Twitter user Ogbenyealu’s analysis was perhaps the most telling: “Yesterday I went into a Target that had the new Ulta concept store in it. Today I see that Disney is closing its standalone stores and opening smaller boutiques inside Target. So basically [Target] is about to become a whole ass mall. Like we didn’t spend enough money there already.”

The modern mall is here. New shop-in-shops concepts, including Target’s Ulta and Disney spaces and a recent partnership bringing Sephora into Kohl’s, are creating an updated twist on an old retail concept. In the past, such mini shops were more similar to a department store, with one larger brand offering a curated assortment of a smaller label. Now, large retailers are recognizing potential shopper synergies and banding together in a mutually beneficial partnership. Many, like Ulta and Target, work together on marketing and visuals that remain true to each retailer’s individual branding.

“Historically I think companies were wary of promoting their competitors, but we’re in an era of trying new things, reinventing business models and not being as threatened by change, especially when a similar concept has already happened with no adverse consequences,” says Sucharita Kodali, VP and principal analyst at Forrester, citing the multi-year success of Sephora within former retail partner JC Penney.

That era of trying new things extends to Macy’s, the 163-year-old heritage department store. The company recently announced plans to bring small Toys R Us shops into 400 of its stores beginning next year. Target’s Disney shops, which debuted in 2019, will triple in count to 160 by the end of this year—a move that comes as Disney shuts down standalone stores in high-profile locations such as along Chicago’s Magnificent Mile. Kohl’s introduced Sephora to shoppers at 70 of its 1,160 locations in August, with the eventual goal of hosting 850 sites; similarly, Target plans to extend its Ulta store count beyond the 100 initial locations to 800.

Retail experts say COVID-19 has accelerated the shop-in-shop trend. Consumers have been reluctant to shop in-person as frequently as they did before the coronavirus, and putting new brands within Target—which as an essential retailer has remained open and seen business boom throughout the pandemic—could attract more buyers.

“People are minimizing the stores they want to go to because of COVID or efficiency—this notion of one-stop shopping is becoming a bigger deal,” says Barbara Kahn, Patty and Jay H. Baker Professor of marketing at the University of Pennsylvania’s Wharton School.

The deals also give both participating brands access to new customers. A teen might accompany a parent on a shopping trip to a Kohl’s or Target, for example, just to visit the new beauty shops, suggests Beth Ann Kaminkow, global CEO at VMLY&R Commerce.

“The Gen Z or Next Gen oftentimes governs the choices that end up in the cart,” she says. “By having product that appeals to them, it means they’ll be in the store longer, they’ll be more willing to go on the trip and it will be a successful trip all around.”

Marketing such sites is a delicate balance of collaboration, much of it pre-determined by contracts. Many shop-in-shops are simple real estate transactions in which a brand rents out a space from the larger store and is able to operate and brand it as they want. But some deals go deeper and include revenue-sharing arrangements such as the smaller store paying its host a percentage of sales. Marketing arrangements, including brand identity for the smaller shop, are also included in the contract stage. Such is the case with many retail partnerships in China, which has successfully pioneered the concept, according to Kahn.

At Target, each shop-in-shop is unique from the others, according to a spokesman, who notes a “collaborative approach with all of them when it comes to branding and marketing.” The mini Ulta stores are staffed by Target employees who were trained by Ulta and also have enhanced lighting so consumers can better see the beauty products.

“Every aspect of the store experience was thoughtfully designed to celebrate this perfect pairing, including the unmistakable Ulta Beauty orange canopies and bold, vivid graphics beautifully woven into the existing Target store,” says Haus, noting that as on the store design, the Ulta and Target teams are working “in lock step” on marketing. Such efforts include a co-produced announcement and social content, influencer engagement and a TikTok challenge.

Kohl’s Sephora endeavor is similar. The retailers have collaborated on pop-up activations, social sweepstakes, influencer campaigns and prioritizing Sephora at Kohl’s messaging across channels, according to Greg Revelle, chief marketing officer at Kohl’s.

“These are complete Sephora shops in our stores, creating a fully branded experience for our customers,” says Revelle, adding that the 2,500-square-foot shops have specific fixtures and lighting—like a standalone Sephora. “Right when a customer walks up to Kohl’s, they will see the massive Sephora branded entrance, which is a big, bold statement that not only captures the attention of our customers but also shows our deep commitment to this partnership.”

At a time when all marketers are looking to strengthen consumer connections, the shop-in-shop concept gives brands more control over the customer experience than they would have if they just stocked products on shelves. The brand within the larger brand has the advantage of controlling its own logistics and branding.

“As we’re moving to this omnichannel world and the complexity of managing this 360-degree, 24/7 customer experience, it makes sense the store and brand wants to control that as much as possible,” says Kahn.

In addition, since most retailers now have their own media networks, marketing new shops is easier to do on existing channels like newsletters, email notifications and websites, according to Kaminkow.

“All of these assets have been bundled together in interesting ways for the other retailers to jump on top of,” she says. “You’re doing something that is going to create value for both of the properties or brands.”

Of course, retailers must also do their homework. A marketer like Sephora or Ulta would want to make sure a new shop-in-shop is not too close to an existing standalone store, which could risk cannibalizing sales. In addition, brands must share consumer data in their relationship so that the mini store knows what products to stock for certain geographies and communities, experts say. The stock is smaller and more curated, so brands need to make sure they are not wasting valuable shelf space with the wrong items.

Shop-in-shops can also boost loyalty programs. At Target, the Target Circle loyalty program is linked to Ulta’s Ultamate Rewards membership, so shoppers are able to earn points for both programs. The Sephora shop at Kohl’s follows a similar format with Kohl’s Rewards and Sephora’s Beauty Insider points. Such offerings will be attractive to consumers looking for promotions and freebies, but is also valuable for marketers by providing more first-party data and customer access, experts say.

“People are still looking for that right combination of convenience and efficiency with inspiration and freshness if you get that right mix of brands, you will absolutely win,” says Kaminkow.

Tickets to the 2021 Ad Age Leading Women Conference & Awards are available at AdAge.com/LeadingWomen